Born and raised in Los Angeles, Armando DeLA Torre is a restauranteur and artist known for developing the Guisados restaurants and Georges Burger Stand, as well as all DeLA branded artwork.  Torre studied to become a lawyer before shifting his focus to open a taqueria with his father. Combining his interests in art and food, he began featuring local artists’ work in each Guisados location. Under the moniker DeLA, Torre’s artwork and photography have been featured in galleries, magazines (both digital and print), as well as on apparel, canvas, architecture, shoes, and murals. He and his wife live in DTLA with their daughter, Amari Summer Grace. 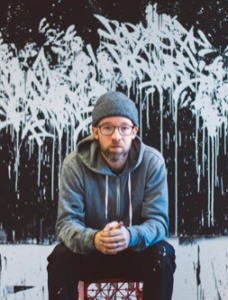 Bisco Smith is a contemporary visual artist with roots in music, graffiti, and street art. A Los Angeles local, who currently resides and works in Queens, New York. Bisco works in a variety of formats, including canvas and large outdoor murals, and is known for his “visual freestyle”—characterized as a blend of graffiti deconstruction, gestural abstraction, and lyric-based stylewriting. Made predominantly with a black and white color palette, his art visually captures the rhythms of music and the energy of the moment through its spontaneous marks and abstracted text.

Colette Miller created the Global Angel Wings Project in 2012, in the streets of Los Angeles, the City of Angels. She painted them to remind humanity that we are the angels of this earth. The wings are human-sized interactive street art, and when people take photos with them, they become part of the art. The first few pairs were “self-authorized” in the streets of Downtown L.A., and since then, the wings have been installed in many American cities, and in locations around the globe, including Kenya, Australia, Turkey, Cuba, and Mexico. Miller’s art is inspired by her heart, dreams, philosophies, memories, psychic or intuitive forces, and color and movement. She believes successful art tends to invoke a type of meditation or mind travel.

Conceptual artist Davia King’s emotionalism style merges elements of abstraction and action painting. She begins with a provocative background of bold colors and layered paint, and then uses members of the public as her models, completing the piece by drawing them in her signature blind contour style. Each portrait is an intimate one-on-one experience with a particular subject. She looks directly at them without breaking gaze, building a connection as she creates an authentic portrait without revision, edits, or filters. The final pieces are abstract, while capturing the essence of her subjects. Davia’s intention is to continue to use her art as a means to connect with humanity and raise consciousness.

An architect and street artist since 2004, DJLU uses stencil and other techniques such as stickers, posters, mural painting, publications, and stamps. His series Street Pride consists of large-format, multi-layered stencils. His character portraits, based on photographs that he has taken, pay homage to the anonymous people who inhabit public spaces, challenging commercial stereotypes. He has participated in over 100 collective and 10 solo exhibitions in Colombia and abroad.

LA-based El Care Barbie makes Colombia blush with collages combining the people and artifacts seared into his homesick memory and the cultural memory of his birth country. His work uses wordplay, satire, and seemingly-unrelated images to challenge his viewers to rethink current events, history, and one’s own positionality. His posters and stickers grace the walls of Bogotá, Tijuana, São Paulo, Rio de Janeiro, and Van Nuys.

Erin Yoshi was born in Los Angeles. Her artwork is rooted in her historic cultural memories and informed by current global conditions. It reflects her journey through the contradictions of life, amplifying the beautiful, the raw, and the downright ugly. Yoshi uses her creative practice to inspire, engage and transform space. She is a member of the Trust Your Struggle Collective (US), COI (LA), and APC (Colombia). She holds an MBA in International Sustainability, and previously managed two public art nonprofits—the Estria Foundation and the Mural Conservancy of Los Angeles. Yoshi has created murals in across the United States and around the world.

Gabe Gault’s body of work is heavily influenced by camouflage and today’s pop culture. His motto is “blending in, standing out” which references iconic figures seamlessly integrated into today’s society. His overall goal is to mold and influence the world with his artwork.

KFiSH was born in Southern Florida, and because his father was in the Navy, the family often moved from place to place. His father retired to San Diego when Kelcey was young—and Kelcey has called Southern California home ever since. He has lived in the L.A. area for the last eight years, including seven years in Venice Beach. As an artist, KFiSH made his first real impact in the mid-2000s, splashing his iconic portraits and colorful, frenetic pattern work—described as “controlled chaos”—throughout his community. His work is informed by the energetic colors of beach culture and the underlying depth and turbulence of the sea. In 2017, KFiSH was named the first artist-in-residence at OLiVE DTLA. His work has appeared in cultural hotspots throughout Los Angeles and around the world.

Maria is a multidisciplinary fine artist who is equally at home working on large-scale street murals or smaller scale detailed work in her studio practice. Born in England, she now lives and works in Los Angeles.

Kyle Boatwright began his artistic path at a young age, and he discovered art’s importance in his life when he was 13. During a series of psychiatric hospital stays to treat his serious depression, he began drawing and painting whenever he had the opportunity. While struggling with addiction and self-destructive behaviors, he developed a passion for graffiti. It led to a one-year jail sentence, and he used that time to focus on his art skills, determined to change his life upon release. Since then, Boatwright has been painting murals whenever the opportunity unveils itself. He has created murals for companies such as Adidas, Microsoft, Coca-Cola, Toyota, and Case Logic.

Martellus Bennett was one of the top tight ends in the National Football League for more than a decade, but his talents extend beyond the football field. Bennett has always loved drawing and writing, and while he was an NFL player, he continued to develop his creative side. In 2014, he founded The Imagination Agency, a multimedia production company focused on children’s literature, entertainment and education. Bennett’s creative projects include writing, illustrating, and publishing two children’s books featuring African American characters, along with mobile apps and an animated YouTube series. He is also a musician and has released several mix tapes and EPs. In 2017, he won Super Bowl LI with the New England Patriots, and was named to Adweek‘s Creative 100 List and The Root‘s 100 Most Influential African Americans. Bennett retired from the NFL in March 2018. He lives in Los Angeles with his wife Siggi and daughter Jett.

Originally from the South Bronx, Moncho 1929 lives and works in Los Angeles. He has been deeply influenced by global aesthetics and the urban artwork that surrounds him in his daily life. His art practice continues to evolve, yet stays true to challenging contemporary societal notions. Moncho 1929’s artwork has been featured in various solo and group exhibitions in the United States and around the world, including the Perez Art Museum in Miami and Gallery Ann in Seoul, Korea. His work can be found in multiple private, city, and corporate collections, from the LA Clippers to the French Consulate of the U.S. to the public art collections of Glendale, Los Angeles, and West Hollywood.

Priscilla Carpenter Witte is a Los Angeles based illustrator, painter, and muralist. She was born and raised in Clinton, New York, a small town outside of the Adirondacks, and has always loved the arts. When she was 19, she visited Southern California and never looked back. An early show at a friend’s loft space in Venice inspired her to keep making art. That led to mural projects around Los Angeles—and around the world. Her style is simplistic, to the point, quirky, and relatable. She has worked with such companies as GT’s Kombucha, WeTransfer, Bud Light, Red Bull, Schwarzhopf, Keds, Ipsy, Nordstrom, Top Shop, Credit Karma, and Marriott.

Ralph Ziman was born in 1963 in Johannesburg, South Africa, and currently lives and works in Los Angeles, California. An interdisciplinary artist, his practice is motivated by a sense of social responsibility toward global politics. His work has been the subject of solo exhibitions at Joseph Gross Gallery in Tuscon, Arizona, and C.A.V.E. Gallery in Venice, California, as well as group exhibitions at the National Gallery in Cape Town, South Africa, the Museum of Contemporary African Diasporan Arts in Brooklyn, New York, and the FNP Art Fair in Johannesburg, South Africa. He has been featured in Art in America, BBC, CNN, The Guardian, The Independent, and The Wall Street Journal, among other publications. His award-winning film projects have screened at prestigious festivals around the world, including Berlinale International Film Festival, Toronto International Film Festival, and Zurich Film Festival. His feature film Jerusalema was short-listed for a Best Foreign Film Language Academy Award nomination in 2008.

Tiaan Schreuder was born in South Africa, and later immigrated to the United States. A multi-disciplinary artist and designer, he is best known for his large scale commercial work, while his personal style and subject matter is inspired by cultural metamorphosis. Working in acrylic, his portraiture and figurative works often address the eternal beauty and resilience of the feminine energy. His artwork deals with chaos and order, tradition and change, through the dichotomy of painting and design.

Verónica Villarreal Sada is a Mexican artist, born in Monterrey, Nuevo León, in 1989. She uses drawing, acrylic and oil painting in her work, which questions themes such as life and death, but has a modern, joyful feel that reflects her personality. Villareal considers herself “an artist on the rise” with more to learn as she experiments with new techniques and mediums. She has collaborated with such brands as Tequila Patron, Liverpool, Mercedes Benz, Aeropostale, Audi, and Outlaw, among others. She is interested not only in creating art for the eye, but also for the benefit of the world, and has supported such foundations as Cambio de Juego, Comunidad Altruista, and Fundación Integrarte.

Yanoe, a Belgian American artist, was born in Baton Rouge, Louisiana, and moved to Los Angeles in the early ‘90s. He began writing graffiti at age 11, and by 17, he was one of the most prolific names in Los Angeles. Yanoe has painted in more than 20 countries, and his work has appeared in art publications around the world. In recent years, Yanoe has shifted his focus to fine art in the form of large scale murals, studio and commercial works. His clients include Nike, Urban Decay, Headspace, Google, Apple, Facebook, and Netflix.

Zachary Bennett-Brook was born in Wollongong, Australia, and is a proud Indigenous man of Torres Strait Islander heritage. He grew up surrounded by the water, and water has always played a vital role in his life. The ocean, ingrained in his cultural heritage, is often represented in his artworks and designs. It has been shown at solo and group exhibitions around the world. Bennett-Brook strives to create artworks that are of the highest quality, blending his passion for surfing with his Indigenous background to showcase his artistic flare. His ambition is to create and develop works which are engaging and aesthetically appealing, while allowing him to grow artistically and professionally.